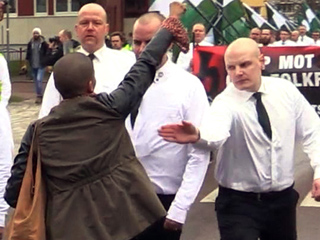 Tess is a woman who has experienced abuse in her life living as a person of African origin in Northern Europe. She recently came to world media attention when she was confronted by a Neo-Nazi rally of some 300 people demonstrating to keep Sweden free of darker skinned immigrants. She stepped into the road in front of the approaching demonstrators and confronted them. Luckily the impulsive act was captured on camera by a photo journalist and through the week, her brave act has been shown hundreds of thousands of times across the world, and has featured in many news stories.

It is impossible to estimate how many hearts she has touched in the process, or how many people have been encouraged to make a stand for justice as a result. The story could so easily have had a tragic end with her being beaten by Neo-Nazi’s who have not been shy of doing hurting those they meet in other situations, but sometimes circumstances, fate or simply being I na right place at the right time, all combine to add power to a simple act of protest.

Most abuse people fall into a feeling of powerlessness. Stories from people like Tess remind us to allow a sense of willingness to stand for justice to take root in our deepest being. Those of us who have experienced injustice or inhumane treatment at the hands of others, can so easily fall into believing the lie that we cant do anything to make a difference, especially if we have been left with fear or anxiety following our own abuse. Many people struggle with the  temptation to avoid anything that triggers us, but it is so important to find ways to reclaim our future and not allow fear and anxiety to determine where we go, what we do, or how we react. This is not always easy, and always does take courage. A wise guide and supportive counsellor or group of friends can help, but it still takes courage- lots of it.